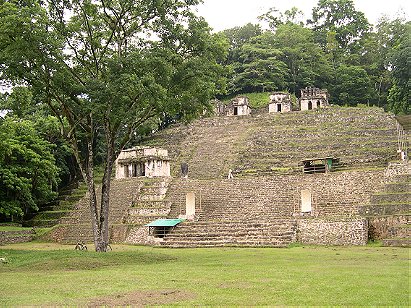 View all Bonampak pictures (6 more)
Bonampak is an ancient Maya archaeological site in the Mexican state of Chiapas. The site is approximately 30 km (19 mi) south of the larger site of Yaxchilan, under which Bonampak was a dependency, and the border with Guatemala. While the site is not overly impressive in terms of spatial or architectural size, it is well known for a number of murals, most especially those located within Structure 1 (The Temple of the Murals). The construction of the site’s structures dates to the Early Classic period (c. AD 580 to 800).

The site, lying close to a tributary of the Usumacinta River, was first seen by non-Mayans in 1946. Precisely who was first is a matter of speculation, but it was either by two American travelers, Herman Charles (Carlos) Frey and John Bourne, or photographer/explorer Giles Healey. The Americans were led to the ruins by the local Lacandon Maya who still visited the site to pray in the ancient temples. Giles Healey was the first to be shown the huge paintings covering the walls of one of the structure's three rooms. The paintings show the story of a single battle and its victorious outcome.