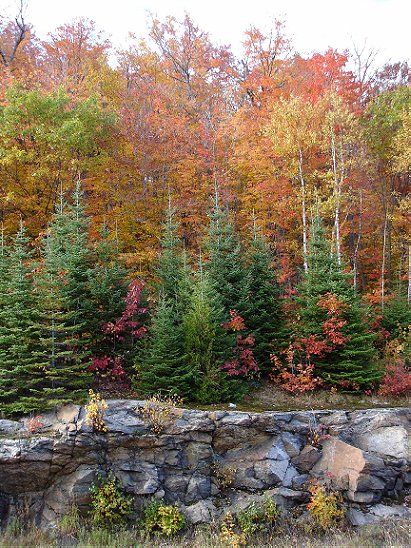 View all Algonquin Provincial Park pictures (5 more)
Algonquin Provincial Park is a provincial park located between Georgian Bay and the Ottawa River in Central Ontario, Canada, mostly within the Unorganized South Part of Nipissing District. Established in 1893, it is the oldest provincial park in Canada. Additions since its creation have increased the park to its current size of about 7,653 square kilometres (2,955 sq mi). For comparison purposes, this is about one and a half times the size of Prince Edward Island or about a quarter of the size of Belgium. The park is contiguous with several smaller, administratively separate provincial parks that protect important rivers in the area, resulting in a larger total protected area.

Its size, combined with its proximity to the major urban centres of Toronto and Ottawa, makes Algonquin one of the most popular provincial parks in the province and the country. Highway 60 runs through the south of the park, while the Trans-Canada Highway bypasses it to the north.

Over 2,400 lakes and 1,200 kilometres of streams and rivers are located within the park. Some notable examples include Canoe Lake and the Petawawa, Nipissing, Amable du Fond, Madawaska, and Tim rivers. These were formed by the retreat of the glaciers during the last ice age.

The park is considered part of the "border" between Northern Ontario and Southern Ontario. The park is in an area of transition between northern coniferous forest and southern deciduous forest. This unique mixture of forest types, and the wide variety of environments in the park, allows the park to support an uncommon diversity of plant and animal species. It is also an important site for wildlife research.

Algonquin Park was named a National Historic Site of Canada in 1992 in recognition of several heritage values including: its role in the development of park management; pioneering visitor interpretation programs later adopted by national and provincial parks across the country; its role in inspiring artists, which in turn gave Canadians a greater sense of their country; and historic structures such as lodges, hotels, cottages, camps, entrance gates, a railway station, and administration and museum buildings.

Algonquin Park is the only designated park within the province of Ontario to allow industrial logging to take place within its borders.