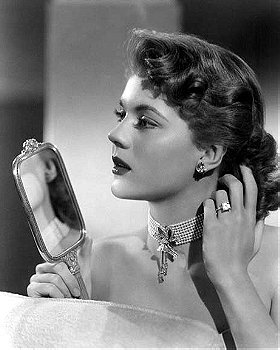 Born Peggy Blair in Appalachia in Wise County in far southwestern Virginia, Castle was discovered by a talent scout while eating in a restaurant in Beverly Hills. She was signed to a seven-year contract with Universal-International and made her film debut in the 1947 film When a Girl's Beautiful. In 1949, she was named "Miss Cheesecake" by the Southern California Restaurant Association. Later that year, the Junior Chamber of Commerce named Castle "Miss Three Alarm". She later appeared in such films as Payment on Demand (1951), Invasion U.S.A. (1952), 99 River Street (1953), and Arrivederci Roma (1957).

In the 1950s, Castle moved into television. She appeared in multiple guest roles on Fireside Theater, Cheyenne, and The Restless Gun. In 1957 she played defendant Sally Fenner in the Perry Mason episode, "The Case of the Negligent Nymph." From 1959 to 1962, she co-starred in the television western series Lawman. Her final onscreen role was a guest appearance in a 1966 episode of The Virginian.

Castle was married a total of four times. Her first marriage was to Revis Call. They married in 1945 and divorced in 1950. In 1951, she married Universal publicist Robert H. Rains. They divorced in April 1954. Her third marriage was to producer/director William McGarry in 1955. They had a daughter, Erin, before divorcing in 1969. Castle's fourth and final marriage was to Arthur Morganstern in 1971. They remained married until Morganstern's death in April 1973.

In her later years, Castle developed alcoholism. On August 11, 1973, her third husband, William McGarry found her body on the couch of her Hollywood apartment. Her death was later determined to be caused by cirrhosis.

Kendraatje voted for an image 2 years, 3 months ago

Kandi voted for an image 3 years, 11 months ago

Viro voted for an image 4 years, 4 months ago

irishblue voted for an image 4 years, 5 months ago

irishblue added this to a list 4 years, 5 months ago
Actresses Forgotten (377 person items)

TrekMedic voted for an image 4 years, 5 months ago

heel99 voted for an image 5 years, 7 months ago

Ice & Fire voted for an image 6 years, 3 months ago