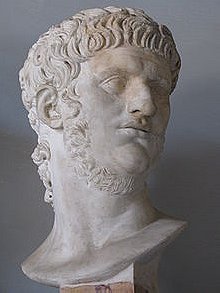 187 votes
Scum of the Earth: The Most Hated People Ever (13 items)
list by Severin Severin
Published 9 years, 2 months ago

View all Nero Caesar pictures
Nero (/ˈnɪəroʊ/; Latin: Nero Claudius Caesar Augustus Germanicus; 15 December 37 – 9 June 68 AD) was the last Roman emperor of the Julio-Claudian dynasty. He was adopted by his great-uncle Claudius and became Claudius' heir and successor. Like Claudius, Nero became emperor with the consent of the Praetorian Guard. Nero's mother, Agrippina the Younger, was likely implicated in Claudius' death and Nero's nomination as emperor. She dominated Nero's early life and decisions until he cast her off. Five years into his reign, he had her murdered.
Tags: Evil (1), Roman Emperor (1)
My tags:

Wetzneer posted a image 4 years ago