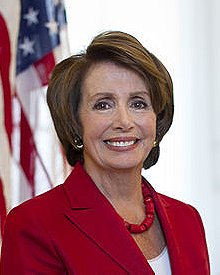 A member of the Democratic Party, Pelosi represents California's 12th congressional district, which consists of four-fifths of the city and county of San Francisco. The district was numbered as the 5th during her first three terms in the House, and as the 8th from 1993 to 2013. She served as the House Minority Whip from 2002 to 2003, and was House Minority Leader from 2003 to 2007, holding the post during the 108th and 109th Congresses alongside President George W. Bush.

Pelosi is the first woman, the first Californian, and first Italian-American to lead a major party in Congress. After the Democrats took control of the House in 2007 and increased their majority in 2009, Pelosi was elected Speaker of the House for the 110th and 111th Congresses alongside Presidents Bush and Barack Obama.

On November 17, 2010, Pelosi was elected as the Democratic Leader by House Democrats and therefore the Minority Leader in the Republican-controlled House for the 112th Congress. ... (more) (less)
Tags: Democratic Party (1), Democrat (1), United States House Of Representatives (1), Politician (1), Minority Leader (1), Born 1940 (1), Loves To Hear Her Name Said Out Loud (1)
My tags:

2. Know Your Power: A Message to America's Daughters

3. Know Your Power: A Message to America's Daughters

2. Know Your Power: A Message to America's Daughters

3. Know Your Power: A Message to America's Daughters

TrekMedic voted for an image 2 years, 2 months ago