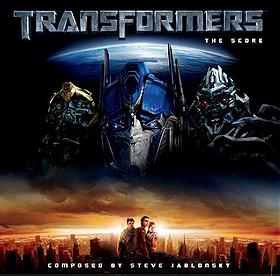 View all Transformers: The Score pictures


Ask, and ye shall receive: When Michael Bay's Transformers came out in the summer of 2007, a soundtrack was issued that gathered a collection of pop and rock songs. But fans clamored for the score so arduously that it was released a few months later. Was it worth it? Steve Jablonsky comes from Hans Zimmer's stable of composers, and anybody with half an ear could have guessed it. Jablonsky's other main influence is pretty much the last 15 years of summer action movies: There's nothing here you haven't heard before, but it's pretty nifty blaring out of a multichannel set-up--though an iPod may do the trick as well. The CD opens with the two main themes ("Autobots" and "Decepticons"), which will be alluded to throughout, particularly in "Sam on the Roof;" the bad guys fare better as "Decepticons" delivers a bigger bang, while the good Autobots get the usual elegiac choir. But forget about subtlety: The best tracks are the full-on aggro ones and are easy to spot: They have titles such as "Frenzy," "Scorponok," "Downtown Battle." Note that half the tracks sport an asterisk indicating a "different version in film," which seems odd, since the album was prompted in large part by fan demand--wouldn't sticking to what's in the film have been be a better way to indulge those who really wanted to hear these cues again? --Elisabeth Vincentelli