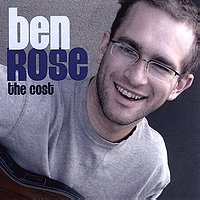 View all The Cost pictures

Ben started writing songs as a teenager but didn’t consider getting paid for it until, during a two year stint exploring England and Europe, he ran out of money and food in Italy. He literally sang for his supper and thus began a lifelong love of performing live. He has made his living at it ever since.

Currently based out of Calgary, Alberta, Ben has performed in Italy, the Czech Republic, Germany, and England as well as Canada. He still performs regularly with his dad backing him up on bass and vocals. His first full length original CD, “The Cost,” features his father as well as Canadian Blues man Tim Williams.

…and short of it:
Ben Rose is a bubblegum-protest singer in the tradition of Paul Simon and Bob Marley. What does that mean? Imagine the love child of Gwen Stefani and Billy Bragg. He protests the usual stuff: war, crappy jobs, starving Hollywood starlets etc. but he never forgets to entertain. His sound is all about variety; reggae, bluegrass, funk and swing with killer hooks and old-time harmonies. ... (more) (less)
Manufacturer: Independent
My tags: