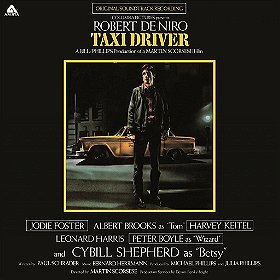 
American composer Bernard Herrmann's last film score was for director Martin Scorsese's (and writer Paul Schrader's) deeply unsettling, Dostoyevskian film noir, Taxi Driver--a portrait of urban alienation that's never been matched. In the slow-motion images of New York City as Dante's Inferno (steam rising into the air to suggest the hellfire below), the orchestral music is ominous and dissonant, a rumble and crash that rises up from the underworld. But Herrmann's other major motif is a slinky, smoldering sax theme that suggests the forbidden pleasures of big-city nightlife--bars and clubs, prostitutes and porno palaces--things Travis Bickle (Robert DeNiro) may himself indulge in, but that give him no pleasure. (In fact, they disgust him.) The soundtrack features a track in which Herrmann's music is played behind bits and pieces of narration from Travis's "diary": "Some day a real rain will come along and sweep all the scum off the streets." Unforgettable music, unforgettable movie. --Jim Emerson