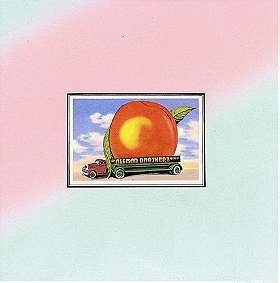 View all Eat a Peach pictures

Eat a Peach was a mix of studio recordingsвАФboth with and without Duane AllmanвАФand recordings from the band's famed 1971 Fillmore East performances. The album contains the extended half-hour-long "Mountain Jam," which was long enough to take up two full sides of the original double-LP. Other highlights include vocalist Gregg Allman's performance of his brother's favorite song, "Melissa," plus Dickey Betts' "Blue Sky", which went on to become a classic rock radio staple.

The album artwork was created by W. David Powell and J. F. Holmes at Wonder Graphics, and depicts the band's name on a peach truck, in addition to a large gatefold mural of mushrooms and fairies. The album's title came from a quote by Duane Allman: "You can't help the revolution, because there's just evolution ... Every time I'm in Georgia, I eat a peach for peace ... the two-legged Georgia variety."

Stehako added this to a list 3 years, 3 months ago