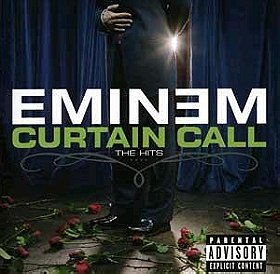 
Eminem's four studio albums shattered so many sales records that you might think just about every man, woman and gerbil on the planet already owns a bulk of the songs that make up this greatest hits collection. But Curtain Call presents the perfect opportunity to have another look at the life of Marshall Mathers. Starting out in the vein of the Beastie Boys and Slick Rick, he grafted filthy verses over bubbly nursery rhyme melodies and primitive Casio beats to come up with comical singles like "My Name Is" and "Real Slim Shady." Then angst and reflection set in, resulting in rare moments of vulnerability ("Lose Yourself") and a richer musical experience ("Stan"). The three new tracks reflect the entire spectrum, with "When I'm Gone," a bittersweet goodbye letter, signaling the raw emotion and youthful enthusiasm of his early days have substantially faded, while "Fack" counters that the Detroit rapper still has the dirtiest mouth in the business. --Aidin Vaziri