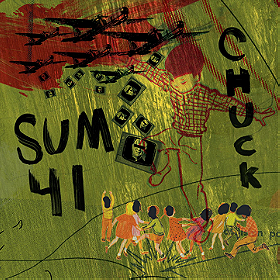 Album Details
This Edition Includes an Exclusive UK Only Enhanced Section. Their Third Album Produced by Greig Nori and Mixed by Andy Wallace and Tom Lord-alge. It Packs the Volatile Punk Punch the Band is Known For, While Showcasing the Band's Growth Musically and Lyrically. The Group Traveled to the Democratic Republic of Congo in to Shoot a Documentary (With the Nonprofit Group War Child Canada) About the Impact of the Longstanding Civil War on the Nation. Although the Band Arrived During a Time of Cease-fire, While There They Encountered Bombs and Gunfire. The Violence Continued, and They Hid in a Hotel Bathroom for Safety. U.n. Representative Named Chuck Pelletier Made an Evacuation Plan. He Herded the Band Into the Lobby, Then Ran with them Through Gunfire to an Armored Tank and Eventually to Safety... Thus the Genesis of the Title.

CD Smiles added this to a list 1 year, 1 month ago

Anyone posted a image 3 years, 11 months ago