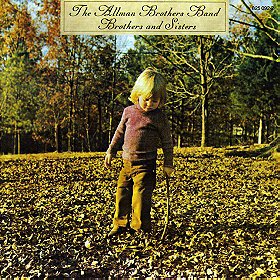 View all Brothers and Sisters pictures

The band carried on, adding new members Chuck Leavell on piano and Lamar Williams on bass. Brothers and Sisters was largely recorded over a period of three months at Capricorn Sound Studios in Macon, Georgia. Lead guitarist Dickey Betts assumed the role of band leader, and many of his compositions reflected a more country-inspired sound. Session guitarists Les Dudek and Tommy Talton sat in on several songs. The album was being produced at the same time as vocalist/organist Gregg Allman's solo debut, Laid Back, and features many of the same musicians and engineers. The front album cover features a photograph of Vaylor Trucks, the son of drummer Butch Trucks and his wife Linda. The back cover features a photograph of Brittany Oakley, the daughter of Berry Oakley and his wife, Linda.

CD Smiles added this to a list 4 years, 4 months ago

Agent Kermit D. Fonz added this to a list 4 years, 12 months ago