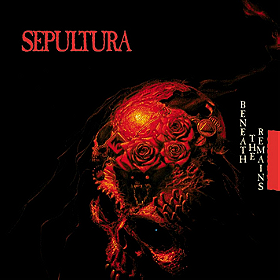 10 votes
One Album One Band (17 items)
list by Georgini
Published 2 years, 1 month ago
View all Beneath the Remains lists (5 more)

1 vote
View all Beneath the Remains pictures


Max Cavalera travelled to New York in February 1988 and spent a whole week negotiating with the Roadrunner label.

Although they offered a 7-record deal to Sepultura, the label was unsure of the band's sale potential. The album's budget was a small amount by the label's standards ($8,000), but in the end the cost was almost twice its original budget.

Scott Burns, who had previously engineered records by Florida extreme metal acts Obituary, Death and Morbid Angel, was the chosen producer. Burns agreed to work for a low fee ($2,000) because he was curious about Brazil.

Apophis added this to owned list 15 hours, 32 minutes ago

SchwarzerAbt added this to a list 7 months, 3 weeks ago
Discography of... Sepultura (25 music items)

SchwarzerAbt voted for an image 7 months, 3 weeks ago

lovedriver rated this 10/10 9 months ago

Georgini voted for an image 2 years, 1 month ago

Georgini added this to a list 2 years, 1 month ago
One Album One Band (17 music items)

CD Smiles added this to wanted list 3 years, 2 months ago

Aldenvdk added this to a list 3 years, 4 months ago