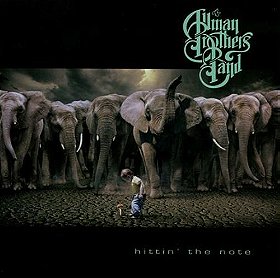 View all Hittin' the Note pictures

The CD was recorded live in the studio in New Jersey in December 2001 with lead vocal and minor overdubs recorded in early 2002. It was the first Allman recording co-produced by bandmember Haynes and Michael Barbiero. The album also marked the band's exit from Sony/Epic Records and was released jointly by Sanctuary Records and the band's Peach Records.