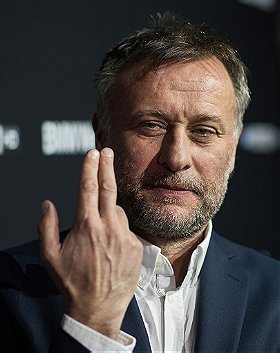 In 2004, he played the lead role as Daniel Darius, a conductor and musician, in the Academy Award nominated Best Foreign Film As It Is in Heaven, directed by Kay Pollak. As It Is in Heaven is one of the most watched Swedish films and the role highlighted Nyqvist's ability to display tenderness and vulnerability at the same time as rage and angst.

In 2006, he starred in Suddenly directed by Johan Brisinger. In Suddenly, Nyqvist plays Lasse - a man who must come to terms with the sudden loss of his wife and son. In 2007, Nyqvist portrayed Swedish ambassador Harald Edelstam, in The Black Pimpernel, a hero who saved several lives from execution in Chile during and after the military coupe in September 1973.

Michael has garnered recent international attention starring as Mikael Blomkvist in The Girl With the Dragon Tattoo (Swedish title: Mon som hatar kvinnor), The Girl Who Played With Fire (Swedish title: Flickan som lekte med elden) and The Girl Who Kicked the Hornets' Nest (Swedish title: Luftslottet som sprongdes) of Stieg Larsson's Millennium Trilogy. Although Nyqvist always was high on the list of potential actors to portray Blomkvist, it was his charisma that got him the role. Director of The Girl With the Dragon Tattoo, Neils Arden Oplev found what he was looking for in Nyqvist - someone with the right looks, charm and likeability.

1. The Girl with the Dragon Tattoo

1. The Girl with the Dragon Tattoo

5. Mother of Mine
View all Michael Nyqvist movies (44 more)

1. The Man from Beijing

MurdererX voted for 3 images 7 months ago

Dagobert added this to a list 1 year, 1 month ago

whalegaze added this to a list 3 years, 11 months ago
Favorite people (73 person items)

MurdererX voted for an image 4 years, 4 months ago

ercer added this to a list 5 years, 4 months ago
Rest in Peace (443 person items)

SwtChaos added this to a list 5 years, 5 months ago

MacGuffin voted for an image 5 years, 5 months ago