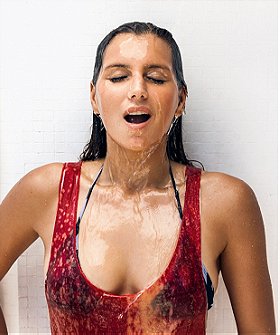 In 2009, Gabeira won the ESPY award for Best Female Action Sports Athlete. Later that year, Gabeira surfed the biggest wave ever by a female when she successfully rode a 14 metres (46 ft) wave at Dungeons, a big-wave surf spot in South Africa.

In 2010, she was awarded with the Billabong Girls Best Overall Performance Award for a record four years in a row.

On October 28, 2013, Gabeira lost consciousness and nearly drowned while surfing a massive wave near Nazaré, Portugal, caused by the St Jude storm; she was saved by her fellow Brazilian big-wave surfer Carlos Burle, ending up in the hospital.

Gabeira's father is Fernando Gabeira, one of the founding members of the Green Party of Brazil. Her father is also a former member of a guerilla group responsible for the kidnapping of the US Ambassador in Brazil, Charles Elbrick, in 1969. ... (more) (less)
Tags: Brazilian (1), Surfer (1)
My tags:

DuckNation rated this 7/10 10 months ago