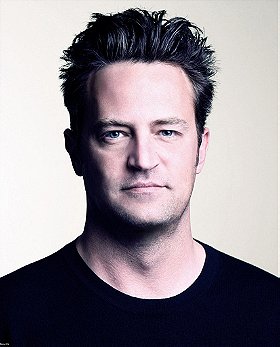 Perry appeared in the hit comedy film The Whole Nine Yards (2000), as the neighbor of a hit man, played by Bruce Willis. His other feature film credits included Fools Rush In (1997), A Night in the Life of Jimmy Reardon (1988), She's Out of Control (1989) and Parallel Lives (1994) (TV). He also co-starred with Chris Farley in the buddy comedy Almost Heroes (1998) and in the romantic comedy, Three to Tango (1999), opposite Neve Campbell. Perry currently resides in Los Angeles. He enjoys playing ice hockey and softball in his spare time.

Mother, Suzanne Morrison, was the press agent for Pierre Trudeau, the Prime Minister of Canada, during the seventies and eighties.

he asked that his name be removed from the Best Actor in a Comedy Emmy list. "Friends" (1994) co-stars have all agreed that they would only be nominated in supporting roles. [June 2000]

Missing part of his middle finger on his right hand, this is due to an unfortunate door-shutting accident in nursery school.

Used to be ranked nationally in junior tennis in Canada. He has said on interviews that he tried to play in the States but he wasn't good enough.

Entered a rehabilitation clinic for treatment of an undisclosed condition. [27 February 2001]

A 75 year old woman ran a stop sign and smashed into the side of Matthew's BMW. Neither party was injured. [18 April 2001]

"Friends" (1994) castmates agree to enter themselves for consideration in the leading role catagories at the Emmys. [2002]

Turned down a role in Independence Day (1996). The part he was offered was eventually taken by Harry Connick Jr..

Has dual citizenship in Canada and the USA.

Made his world stage debut in the West End in London alongside Minnie Driver. [May 2003]

He is the only central cast member of "Friends" (1994) who has not been nominated for a Razzie.

The part of Maj. Don West in Lost in Space (1998) was originally offered to him, but eventually went to "Friends" (1994) co-star Matt LeBlanc.

His favorite NHL team is the Ottawa Senators. He often attends the playoff games in Ottawa, Canada. He attended this year's playoff games between Ottawa and Toronto Maple Leafs (2004).

According to an interview, Matthew claimed that when he was filming A Night in the Life of Jimmy Reardon (1988) he had formed a star complex and would cockily ask his fellow co-stars what they planned on doing now that "they were on their way". He then said that reality settled in once the movie was released and nothing happened.

He spoke the last line in the final episode of "Friends" (1994). When it's suggested that they all go out for coffee, his character Chandler says "Where?".

His father, John Bennett Perry, played his father in Fools Rush In (1997).

He enjoys playing ice hockey and softball in his spare time

When auditioning for the part of Chandler Bing, he didn't need a script because he knew the pilot by heart. He had been helping a friend with the part before auditioning himself.

Auditioned for Chandler Bing on a Friday and started work on that Monday.

Behind the scenes of "Friends" (1994), Perry was very close friends with co-star Jennifer Aniston.

Is on the board of directors for the soon-to-be-opened Ron Clark Academy in Atlanta, Georgia. Ron Clark is a world-renowned educator who Perry depicted in the TNT original film The Ron Clark Story (2006) (TV).

Was the Ottawa Loggers 10th selection in the 1996 RHI (Roller Hockey International) draft.

Is a Toronto Blue Jays Fan.

In season 1, episode 16 of "The West Wing" (1999), he was mentioned as a guest at a party the president was attending in L.A. He later played the character of Joe Quincy in three episodes during the fourth and fifth seasons.

Godfather of Reagan "Fletch" Holder, the son of Christine Cameron and Mark Holder.

Said on his Twitter account that his favorite song is "Don't Give Up" by Peter Gabriel and Kate Bush.

A.M.A voted for 2 images 4 months ago

A.M.A posted a image 4 months ago

Quattroporte voted for an image 7 months, 1 week ago

crazymetalhead added this to a list 9 months, 4 weeks ago
My favorite celebrities (261 person items)

katia42assier voted for an image 1 year, 2 months ago

Nusch voted for an image 4 years, 4 months ago

Nusch voted for an image 5 years, 2 months ago

Emmabell added this to a list 6 years, 6 months ago

CitizenErased voted for an image 6 years, 9 months ago