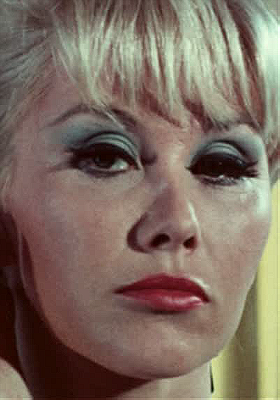 She was born Carolyn Marcel Jordan in the small Southern town of Gadsden, Alabama. She was the granddaughter of a minister and grew up in a Catholic convent. Jordan cites John Wayne as her "ultimate hero." At one point she worked as a stewardess for Delta Airlines.

Marsha first became involved in the softcore feature business while vacationing in Los Angeles in 1960. She appeared in a slew of adults-only pictures throughout the 1960s up until the mid-'70s; she alternated between lead roles--she played the titular characters in Lady Godiva Rides (1968), Marsha: The Erotic Housewife (1970) and Sweet Georgia (1972)--and secondary supporting parts. She was savagely whipped at least 40 times in the harsh adult Western Brand of Shame (1968) and portrays one of Robert Quarry's beautiful bloodsucker brides in the hit drive-in horror cult classic Count Yorga, Vampire (1970). With her sweetly pretty face, long blonde hair and buxom, shapely figure, Jordan was--not surprisingly--a big favorite with male audience members. Moreover, her likable and down-to-earth personality earned her a sizable female following as well.

Jordan further ensured her fame by making public appearances at movie theaters in the South and Midwest that showed her pictures. She was paid $100 to $125 a day or $1,000 a week at the height of her career. Marsha acted in films for legendary "smut cinema" moguls Harry H. Novak and David F. Friedman. She did guest spots on both Gunsmoke (1955) and Star Trek (1966). She also pops up in a TV commercial for Charmin paper towels.