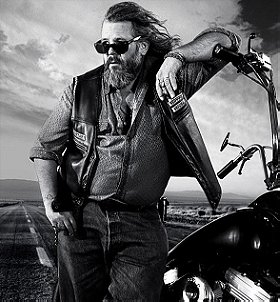 Boone was born Mark Heidrich in Cincinnati, Ohio to Ginny, a retired teacher, and Bob Heidrich, a former construction consultant. He grew up on Chicago's North Shore and attended the University of Vermont.[1] He moved to New York after college, where he started his career performing stand-up comedy with long-time friend Steve Buscemi. His stage name Boone came from a New York City war memorial.

He has appeared in some of Steve Buscemi's directorial work, including Trees Lounge and most recently (2004) as "Evil" in Lonesome Jim. He was a regular cast member on Sons of Anarchy, where he played Bobby Munson. In 2010 he played the role of Vincent Dooly's father in The Mother of Invention.

Queen of Horror added this to a list 3 years, 6 months ago

"FloydHalloween II(2009)COD: knifed in stomach, impaled in back through stomach with deer antlers"

Max the Movie Guy added this to a list 4 years, 9 months ago
Film people I've spotted or met in real life (375 person items)