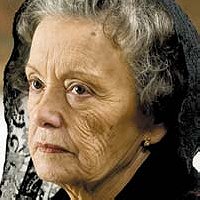 Got a great success with her role in Solas (1999).
Began her career as an actress in the 80s, when she was 50 years old.
Best known for her role of Herminia in Cuéntame cómo pasó (2001).
Worked many years as a teacher in a public high school.
Graduated in Philosophy and Letters.
Supports Betis. ... (more) (less)
My tags:

milica added this to a list 3 weeks, 1 day ago