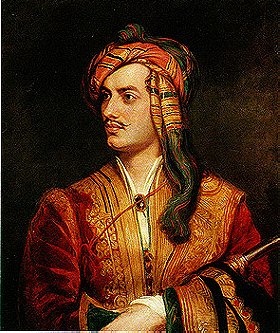 View all Lord Byron pictures
George Gordon Byron, 6th Baron Byron, FRS, known simply as Lord Byron, was an English peer who was a poet and politician. One of the leading figures of the Romantic movement, Byron is regarded as one of the greatest English poets. He remains widely read and influential. Among his best-known works are the lengthy narrative poems Don Juan and Childe Harold's Pilgrimage; many of his shorter lyrics in Hebrew Melodies also became popular.
Tags: British (1), Poet (1), Politician (1), Handsome (1), Romanticism (1), Dandy (1), Born 1788 (1), Died 1824 (1)
My tags:

2. The Poems and Dramas of Lord Byron (The "Arundel Poets")

4. The Poems and Dramas of Lord Byron (The "Arundel Poets")
View all Lord Byron books

1. The Vampyr: A Soap Opera

1. The Vampyr: A Soap Opera