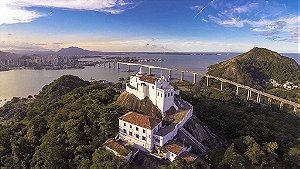 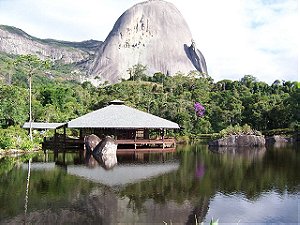 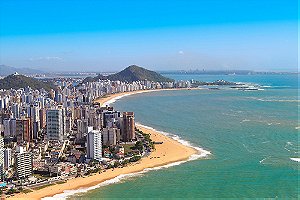 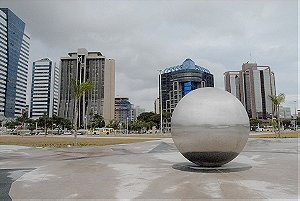 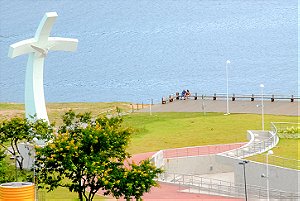 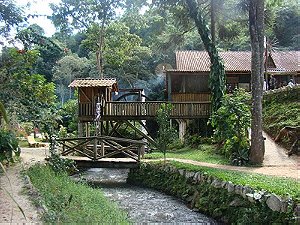 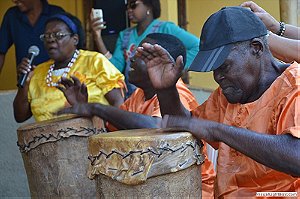 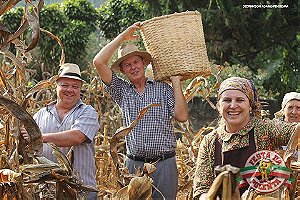 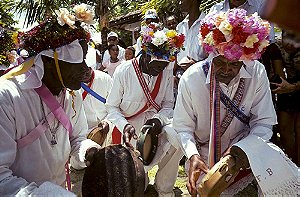 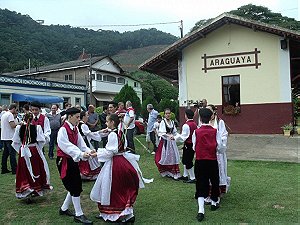 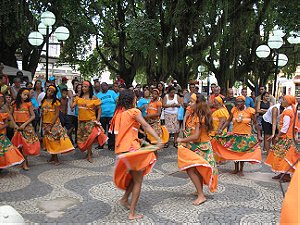 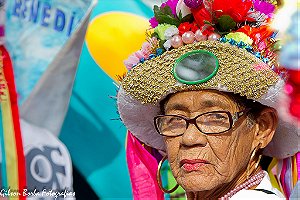 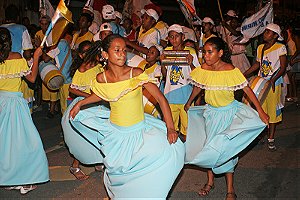 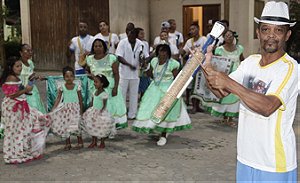 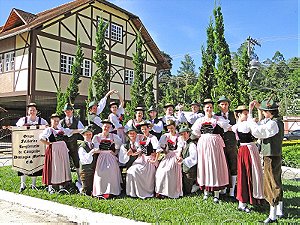 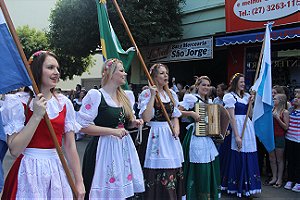 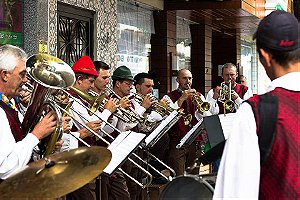 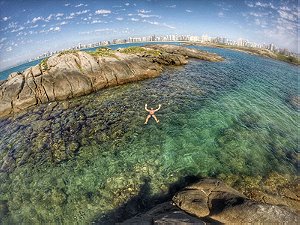 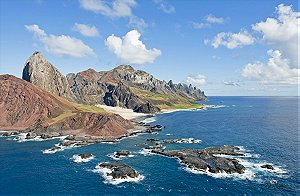 Espírito Santo is one of the states of southeastern Brazil, often referred to by the abbreviation "ES". Its capital is Vitória and the largest city is Vila Velha, satellite from Vitória. The name of the state literally means "holy spirit" after the Holy Spirit of Christianity. With an extensive coastline (40% of the territory is on the coast), the state has some of the country's main ports, but the beaches are the most significant tourist attractions. Vitória, the capital, is on an island, next to Guarapari, well known for its sands. In the extreme north is the district of Itaúnas (pt), part of the municipality of Conceição da Barra, famous for its sand dunes and forró. Coastal cuisine is another attraction with moqueca capixaba and other local seafood dishes. Inland, there are many natural attractions such as the national parks of Pedra Azul and Caparaó, and the Italian and German colonies.

The main river in the state is the Doce (Sweet River). Other important river basins include the Santa Maria River Basin, the northern branch of rivers which join the sea at Vitória, and the Jucu River Basin which flows into the sea at roughly the same place, but corresponds to the southern branch (which seems to come out of Vitória). (See also List of municipalities in Espírito Santo)

Espírito Santo's climate is tropical along the coast, with dry winters and rainy summers. North of Doce River is generally drier and also hot. In the mountainous regions in the south and southwest of the state, the tropical climate is strongly influenced by altitude, and the average temperatures are lower.

This Brazilian state is in the east of the southeastern subdivision of Brazil, which also contains the states of São Paulo, Minas Gerais and Rio de Janeiro. It is bordered by the Atlantic Ocean (E), the state of Bahia (N), the state of Minas Gerais (N and W), and the state of Rio de Janeiro (S). Espírito Santo's main cities (outside of the Greater Vitória region) are Cachoeiro de Itapemirim, Colatina, Linhares, São Mateus and Aracruz.

The pre-colonial Amerindians groups in Espírito Santo were the Tupiniquim, the Temininó, the Aymoré, the Puri and the Botocudo. They have largely been absorbed into the Portuguese-Brazilian civilization, few of them still living in reservations following subsistence farming methods and trying to preserve their fragile culture. Especially back in the 16th century, a number of towns in Espírito Santo were founded with primarily Amerindian populations converted to Catholicism, such as Serra and Santa Cruz. Amerindian food has made its way permanently into Capixaba life, featuring the fish-based moqueca capixaba as the state dish, among other local typical seafood dishes.

Technically from the region that is now Syria and Lebanon, they came to the state fleeing World War I. As at the time they were Ottoman Empire citizens, they were commonly called 'Turcos' (Turks). Large communities were established in the southern part of the state. Now their descendants control a good share of the local commerce. The Arab-Brazilians of Espírito Santo are generally Maronite Christians.

60-75% of the population of Espírito Santo have Italian ancestry, making it the state with the highest percentage of descendants of Italians in Brazil. They founded many towns in the area and have significant influence on Capixaba society. There are still a number of traditional Italian dance groups in the state and Italian culture festivals, such as the one held in the town of Venda Nova do Imigrante. Italian food is also a large part of Capixaba cuisine, and even industry. Italian cheeses like mozzarella are produced locally, and pasta is also made there, with Firenze Pastas being a local producer. Small scale farming, which is turning increasingly towards agrotourism, is appealing to its Italian roots to exploit that market. This is another prominent aspect of Capixaba life.

The first Portuguese colonists arrived in the area called Vila Velha on May 23, 1535 along with Vasco Fernandes Coutinho, the first Portuguese "Captain" of Espírito Santo. Later they also settled on Vitória Island in the Bay of Vitória.

A strong local influence, Germans were among the first colonists to cultivate land away from the coastal zone. The first German settlement, Santa Isabel, was founded in 1844. Like today's Capixaba Italian community, they still hold on to many aspects of their ancestors' homeland's culture, still having active traditional dance groups and festivals such as the Sommerfest in Domingos Martins. Testimony to this is the small Colonization museum in Domingos Martins, where one can find old photos, artifacts and documents pertaining to that settlement movement. Also during the same period, the first colonists from Luxembourg arrived in Espírito Santo.

Espírito Santo is home to the biggest community of Pommersch/Pomeranian speakers in the world. More than a century after arriving to Espírito Santo, the Pomeranian continues to be spoken and remains an important part of Espírito Santo's heritage for many people. To this day they continue centuries old customs within their communities.

Spaniards, especially from the Basque Provinces, settled in Espírito Santo in the times of the Iberian Union (1580–1640). Their main activity was the whale hunting, which were still easily found along Espírito Santo's coast at that time. Highlighting this fact, we find that one of Espírito Santo's history's most important heroines, Maria Ortiz, who took part on the resistance against the Dutch invaders in the early 17th century, was of Basque origin. This trend of Spanish immigration ceased after the Portuguese monarchy's restoration (see Iberian Union), however, a later wave of Spanish immigrants would arrive in larger numbers in the late 19th century.

The first African slaves in Espírito Santo arrived in Vitória in 1609; and years of slavery ensued. However, Espírito Santo was still to play a significant part in the Brazilian abolitionist movement in the guise of the Espírito Santo's slave rebellion of 1848-1849, which demanded intervention of imperial troops. Slavery started losing its economic importance in Espírito Santo after that event.

It's difficult to pin down the exact numbers of immigrants of each of these groups to Espírito Santo because they usually arrived under a common Austrian-Hungarian passport, or, in the case of the Tyroleans, under a Swiss or Italian passport. An important fact regarding Tyrolean immigration was that these groups were formed by young couples who left Tyrol due to the Austrian laws that imposed difficulties for Tyrolean men to marry before the age of 30 (they were supposed to remain in the Austrian army for a longer time), so large numbers of them started crossing the border to marry in Switzerland, and to leave Europe after the wedding. Tyrolean settlers were both of German and Italian language and concentrated in the region of Santa Leopoldina. Romanians (especially from Transylvania and Bukovina) and Roma usually arrived under Austrian passports. Large groups of gypsies settled in Espírito Santo's countryside in the late 19th century, being absorbed by the mainstream of its society later.

This Day in Movie History- December 25th by BradWesley123

The girls i love 7 by Marek

Documentaries - Beauty of Nature »1« by Anautix