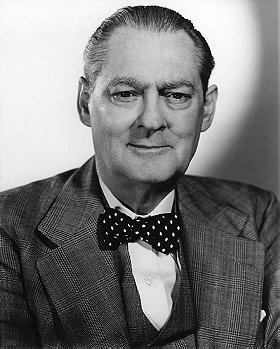 He was born Lionel Herbert Blythe on April 28, 1878 in Philadelphia, the son of actors Maurice Barrymore and Georgiana Drew Barrymore. ("Barrymore" was a stage name). Though raised a Catholic, he attended Philadelphia's Episcopal Academy. He joined the family business and first trod the boards in the mid-1890s, acting with his maternal grandmother, Louisa Lane Drew. He also appeared with his maternal uncle John Drew, Jr. in Broadway plays after the turn of the century. He first acted with his kid brother John in the 1905 play "Pantaloon".

Lionel never developed the heightened reputation as a stage actor enjoyed by his siblings John (who still reigns as the definitive American Hamlet) and sister Ethel. As a screen actor, he was ranked among the best. (Ethel, like Lionel, would win an Oscar. John, despite his reputation as the greatest actor of his generation, was never even nominated, handicapped in those days by being a freelance actor with no ties to a studio, which practiced block voting for Oscars.)

He wed the actress Doris Rankin, whose sister Gladys was married to Lionel's uncle Sidney Drew, and they moved to Paris in the latter part of the fist decade of the 20th Century, returning to The States in 1910. On Broadway, Lionel established a solid reputation as a dramatic character actor, appearing often with Doris. In 1919, he appeared with his brother John in "The Jest" (1919), but unlike John, he did not prove his mettle as a Shakespearean actor. His performance as Macbeth in a 1921 production of The Scottish Play was unsuccessful, and he began focusing more on films, which he first began making at Biograph in 1911 under the direction of D.W. Griffith. At the time he made his first films, movies were considered beneath the dignity of a stage actor.

Lionel and Doris suffered tragedy as their children, two daughters, did not survive infancy. Their first child, named Ethel after his sister, was born and died in 1908. Their second child, Mary, died within a few months of her birth in 1916. He apparently never got over the loss of his two girls (he never had any other children), and he divorced Doris in 1923 and married actress Irene Fenwick, a former lover of his brother John. The marriage strained his relationship with his brother, and they were not reconciled until 1926.

In addition to acting at Biograph, Lionel also tried his hand at directing. At Metro Pictures, he helmed many pictures, including directing his sister Ethel in Life's Whirlpool (1917) (1917). That was his last silent picture as director; he would not sit in the director's chair again until the advent of the talkies. His success as a movie actor was assured when he joined Metro-Goldwyn-Mayer in 1926, two years after the studio's formation, having already developed a strong relationship with Louis B. Mayer at Metro Pictures. He would remain a contract player with MGM until his death 30 years later, though he occasionally was loaned out.

At MGM, he became a star in the talkies and continued as a stalwart character lead and supporting player for parts of four decades, appearing opposite the studio's biggest stars, including John Gilbert, Lon Chaney (for whom he served as a pallbearer at his funeral), Greta Garbo, Jean Harlow, Wallace Beery, Marie Dressler, Norma Shearer, Clark Gable, and Spencer Tracy. In non-MGM films, he appeared with Gloria Swanson in Sadie Thompson (1928) and was reunited with D.W. Griffith in the director's Drums of Love (1928). He also was loaned out to director Frank Capra for You Can't Take It with You (1938) and It's a Wonderful Life (1946) and to producer David O. Selznick for the Technicolor Western potboiler Duel in the Sun (1946).

With the arrival of the talkies, Lionel's stage-trained, mellifluous voice proved to be a great asset, though initially the studio assigned him to directing assignments. He directed Gilbert in His Glorious Night (1929) and guided Ruth Chatterton to consideration for an Oscar in Madame X (1929), for which he garnered his own Oscar nod as Best director. He returned to acting full-time in 1931, giving the performance that won him a Best Actor Oscar in A Free Soul (1931) with Shearer and Gable. He was memorable as Rasputin the 1932 film Rasputin and the Empress (1932), in which he co-starred with John and Ethel. He also appeared with John in the classics Grand Hotel (1932) and Dinner at Eight (1933), although in the latter film, they had no scenes together.

aLittleTyger voted for an image 3 years, 2 months ago

Dark Warrior added this to a list 4 years, 7 months ago

Kandi voted for an image 4 years, 8 months ago