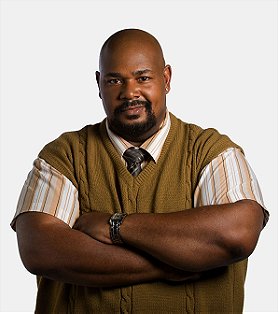 171 votes
The Evolution of the Joker (12 items)
list by nehocb
Published 11 years, 9 months ago

Richardson is a classically trained actor. He first gained recognition as one of only eight U.S. high school students selected for the National Foundation for the Arts' "Arts '82" program, later he earned a scholarship to Syracuse University.

Kevin is well-known by various voice works, mostly villainous. He lent his voice to based-upon video game film Mortal Kombat (1995) as Goro, he was also in Matrix Revolutions (2003) as Deus Ex Machina, and made a brief appearance in Clerks II (2006)as police officer. To mention that he did a brief additional voices for mega hit Transformers: Revenge of the Fallen (2009).

3. The Proud Family: Louder and Prouder

Defenestrated Jack added this to a list 1 year, 8 months ago

rose77 added this to a list 3 years, 1 month ago
My Favorite Celebrities in their 50s (124 person items)

"Jabba the Hutt & Smaug Each is a major antagonist who hails from a notorious race of monstrous beings with a brutish visage. (Hutts/Dragons) He himself is renown for his dangerousness, greed, and arrogance. Although more often than not he prepares to remain sedentary and indulge in the rewards of his plunder. And in spite of his animalistic appearance he possesses a sharp mind. Whilst his relationship with the dark lord (Darth Sidious/Sauron) is unclear and can vary upon the iteration, he "

rose77 added this to a list 6 years, 4 months ago
Favorite Celebrities Born in the Northeast (139 person items)

miaou voted for an image 6 years, 7 months ago