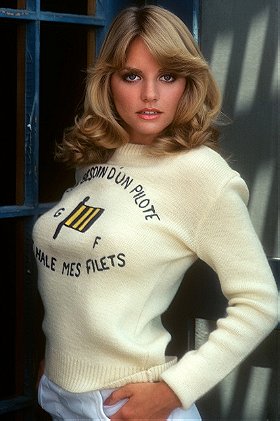 14 votes
Most beautiful women EVER and beyond (2332 items)
list by Scott Newman
Published 1 year, 5 months ago

Her scenes in Paramedics (1988) remain a fan favorite. Karen plays a nymphomaniac (nicknamed Danger Girl) obsessed with seducing men in uniform. In one scene she has just finished making love to an old man (Ray Walston) who is naked and in shock, in another she is on the side of the road waiting for a paramedic van to pass by. When the moment arrives, she lifts up her skirt to show off her shapely legs and smiles. The van of course comes to a screeching halt as it passes her. The back doors open and a black guy grins at her and waves her in. Another man helps her up and closes the doors. We don't see what happens next, but we can imagine!

Witter married television writer and producer Chuck Lorre in the beginning of May 2001, had two children with him and went by the name Karen Lorre professionally during this time. They divorced in 2010 and she reverted back to using her maiden name of Witter.

EFPaisley voted for an image 2 weeks, 6 days ago

David Roffidal voted for an image 1 year, 2 months ago

Scott Newman added this to a list 1 year, 5 months ago
Most beautiful women EVER and beyond (2332 beauty items)

zzzzz1 posted a image 3 years ago

irishblue added this to a list 4 years, 11 months ago
Perfection (2755 beauty items)