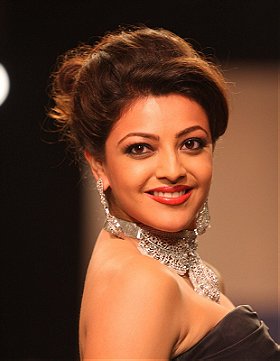 Kajal made her acting debut in the 2004 Hindi film Kyun...! Ho Gaya Na, in which she enacted minor supporting role as the friend of Diya, the film’s lead, played by Aishwarya Rai,[3][4] following which she signed veteran Tamil director Bharathiraja's Bommalattam. The film, however, got delayed and released in late 2008.
She made her debut in the Telugu film industry and played her first leading role in 2007 in Teja's Lakshmi Kalyanam alongside Kalyan Ram, which did not fare well at the box office. Later that year, she appeared in the Krishna Vamsi-directed film Chandamama, which opened to positive reviews and became her first major successful film.In 2008, she had her first Tamil film release, Perarasu's action entertainer Pazhani, co-starring Bharath. Following this film, she had two more Tamil releases that year with Venkat Prabhu’s comedy-thriller Saroja, in which she did a guest appearance, and Bharathiraja’s investigative thriller Bommalattam. Although the former went on to become a commercial as well as a critical success,both films failed to boost her career as her roles were too insignificant.Both her Telugu releases, Pourudu and Aatadista opposite Sumanth and Nitin, respectively, neither received positive reviews nor were successul at the box office. ... (more) (less)
Tags: Brunette (1), Agarwal (1), Kajal (1), Tollywood (1), South Indian (1), Decent (1), Born In 1985 (1), Born 1985 (1), Telugu (1), India (1), Actress (1), Indian (1), 1985 (1), Female (1), Bollywood (1), Hot (1)
My tags:

parryj voted for 3 images 2 months ago

franlob voted for an image 2 months, 1 week ago

Cowboy Bebop voted for an image 1 year, 6 months ago

alter posted a image 2 years ago

mygvesz added this to a list 3 years, 3 months ago

TrekMedic voted for an image 4 years, 1 month ago

oriolu voted for an image 5 years, 1 month ago

randompicsguy voted for an image 5 years, 2 months ago

Dave voted for an image 5 years, 6 months ago