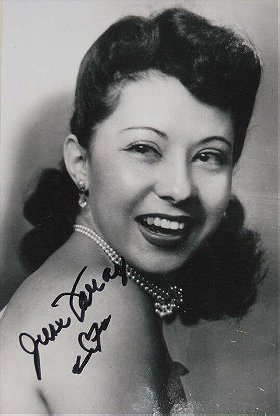 35 votes
Where have all the Grannies Gone? (13 items)
list by Nonfictionguy
Published 13 years, 7 months ago

She started in the voice field at the age of twelve, at a time when she was already doing old lady voices. She had the good fortune of having a speech teacher who also had a radio program in the Springfield area. This teacher became her mentor, and added June to the cast of her show. Eventually June's family moved to California, where she continued in radio. By age fifteen, she was writing her own show for children, "Lady Makebelieve", in which she also provided voices. June dabbled in both on-camera acting and voice work, but was particularly talented in voice characterizations, dialects and accents. Just like Daws Butler, one of her later co-stars, June was a "voice magician" and worked steadily in radio from the 1930s into the 1950s.

In the 1940s, and possibly even as early as the 1930s, June branched out from radio and began providing voices for cartoons. In the 1940s she provided the voices for a live-action series of shorts called "Speaking of Animals", in which she dubbed in voices for real on-screen animals, a task she was to repeat many years later in an episode of The Magical World of Disney (1954). In the late 1940s June, Stan Freberg, Daws Butler, Pinto Colvig and many others recorded hundreds of children's and adult albums for Capitol Records. Her female characterizations on these records ran the entire gamut from little girls to middle-aged women, old ladies, dowagers and witches. No one seemed to be able to do these same voices with the warmth, energy and sparkle that June did.

In the 1950s June's star in animation not only began to rise but soared when Walt Disney sought her out and hired her to do the voice of Lucifer the cat in Cinderella (1950). The Disney organization continued to use June many times over, well into the 21st century. Warner Brothers also hired her to replace Bea Benaderet and do all of its "Looney Tunes" and "Merrie Melodies" cartoons. June has done many incidental characters for Warners, but her most famous voice has been that of Granny (in the "Tweety and Sylvester" series). Unfortunately, since Mel Blanc's contract called for exclusive voice credit on these cartoons, June never received credit for all the voices she did. During this time she also appeared on The Woody Woodpecker Show (1957).

In 1957, Jay Ward met with June to discuss her voicing the characters of "Rocky the Flying Squirrel" and "Natasha Fatale" in a cartoon series. On November 19, 1959, the show debuted as The Bullwinkle Show (1959), later changing its name to The Bullwinkle Show (1959). June provided many other voices for this show, especially its "side shows" such as "Fractured Fairy Tales" and "Aesop and Son". She did fewer voices for the "Peabody's Improbable History" segment, but she did appear in at least three of those episodes. After the show had been successful for a few years, Ward added one of its most popular segments, "Dudley Do-Right of the Mounties". June was a regular in this side show as Dudley's girlfriend Nell Fenwick.

Since Ward used June exclusively for nearly all his female voices, he showcased her talents as no other producer had before. June missed out on doing voices for three of the show's "Fractured Fairy Tales" because she could not reschedule some bookings to do recording work with Stan Freberg, so Julie Bennett filled in for her on those occasions. Dorothy Scott--co-producer Bill Scott's wife--also filled in for June a few times for "Peabody's Improbable History". Her collaboration with Ward made her incredibly famous, and "Rocky the Flying Squirrel" became her signature voice. To this day June regularly wears a necklace with the figure of Rocky sculpted by her niece Lauren Marems.

Ward later produced two other cartoon series, Hoppity Hooper (1964) and George of the Jungle (1967). June's appearances on "Hoppity Hooper" were limited to the segments of "Fractured Fairy Tales", "Dudley Do-Right" and "Peabody" that aired during its run. On "Fractured Fairy Tales" June did a whole montage of voices similar to those from her Capitol Records days. Her witch voices were so incredibly funny and magnificently done that Disney and Warner Brothers tapped her to provide that same voice for the character of Witch Hazel. She was once again the lone female voice artist, this time on "George of the Jungle". Included on that show were the "Super Chicken" and "Tom Slick" side shows.

In the 1960s, June lost out to Bea Benaderet when she auditioned for the voice of "Betty Rubble" on The Flintstones (1960). June appeared numerous times during the decade in holiday specials such as Frosty the Snowman (1969) and The Little Drummer Boy (1968)). In the 1960s and 1970s, June dubbed in voices for full-length live-action feature films many times. Jay Ward and Bill Scott also had her dub in dialogue for silent movies in their non-animated series Fractured Flickers (1963).

In the early 1970s, June tried her hand at puppetry. She became the voice of an elephant, an aardvark and a giraffe on Curiosity Shop (1971). Around this time she also recorded various voices for the road shows of "Disney on Parade", which toured the US and Europe for several years.

She acted on-camera occasionally over the years, primarily on talk shows, game shows and documentaries; in the early years of The Tonight Show Starring Johnny Carson (1962), she performed a 13-week stint as a little Mexican girl. However, June had said that she prefers to record behind the scenes because she jokingly said "She can earn more money in less time."

1. Did You Grow Up With Me, Too? - The Autobiography of June Foray

1. Did You Grow Up With Me, Too? - The Autobiography of June Foray

Atomic Cinema added this to a list 6 years, 5 months ago
Lost in Space Lasses (22 person items)