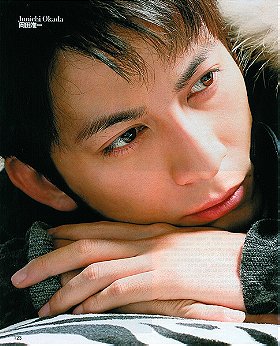 In the summer of 1995, he participated in Johnny's Pre-School, part of the NTV program Tensai, Takeshi no Genki ga Deru Terebi. He passed the audition and joined Johnny & Associates at the age of 14. After being in Johnny's for only a short period of three months, he made his debut as the youngest member of the idol group V6. Unlike the rest of the members in the group, he did not have much experience as Johnny's Jr. The first time that he had been on a music program was only after the debut of V6.

Okada can play the guitar, as well as the piano. His mother is a piano teacher. His voice is in the middle range, and hence his solos usually include slower ballads. Recently, he has been given longer solos in V6 songs, such as "Way of Life". He also reveals that during V6's 2008 concert Vibes, he was directing most of the lightning, staging, and costumes.

Okada is known for being reserved. He does not meet with many people within the agency. In an interview on Shōnen Club Premium, Okada said that when he was little, whenever his name was called up to read something in class, he would feel like vomiting and purposely avoided school on those day. Within V6, he is also the most quiet person. He enjoys carpentry and has carved wooden bears for children.