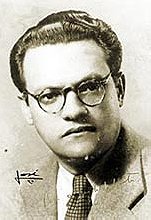 View all Jose Lins do Rego pictures
José Lins do Rego Cavalcanti (July 3, 1901 in Pilar Paraíba - September 12, 1957 in Rio de Janeiro) was a Brazilian novelist most known for his semi-autobiographical "sugarcane cycle." These novels were the basis of films that had distribution in the English speaking world. Along with Graciliano Ramos and Jorge Amado he stands as one of the greatest regionalist writers of Brazil. According to Otto Maria Carpeaux, José Lins was "the last of the story tellers". His first romance, Menino de Engenho ("Boy from the plantation"), was published with difficulty, but soon it got praised by the critics.
Tags: Great (1), Literature (1), Writer (1), Brazilian (1), Semi-autobiographical (1), Brazilian Author (1), Regionalism (1), Biographical Phrose (1), Sugarcane Cycle (1)
My tags: