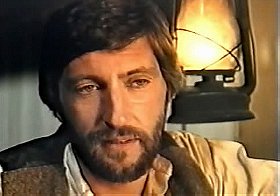 Growing up around his fathers film studio's found him catching the acting bug early. His youngest appearance was at age ten in the original Titanic movie A Night To Remember, followed by a Disney classic Dr Syn and a bit part in Z Cars. John attended Hampton Grammar School from approx 1960 to 1967, appearing as Macbeth in the school play in about 1966 complete with the normally banned long hair.

As a teen he lived every boyhood dream, singing and playing bass in a rock and roll band called The Riots.

In 1968 he took the "ten pound" opportunity offered by the Australian government and sailed to Australia with his guitar and a few pounds in his pocket. He worked on a sheep station before moving to Sydney, where he was working as a storeman by day and frontman of a cover band at night. He soon heard a US film called Adam's Woman, starring Beau Bridges, was being filmed in NSW and got a job as a grip on set. Cast members, including Helen Morse, recommended he try auditioning for an up and coming new musical. He did, and landed the lead role of Claude in Sydney's 1969 production of the landmark rock musical, Hair. This was followed by the role of Judas in Godspell.

This led to an acting career on stage, film and television that elevated him to his current status as Australia's most versatile leading man.

In order to appear a more mature actor, John added 5 years to his age in the early 70s. This, along with exciting stories of how he came to acquire the famous scar beneath his left eye (anything from sword fight in Algiers to bar brawls in Paris), enabled John to get many of the most sought after roles in Australia at the time.

Articles in womens magazines had John celebrating his 40th birthday several years too early. Around the late 80s - early 90s John gradually let the extra years slip until he was back to his real age - where he has remained ever since.

And as for that scar, barely visible thru the rugged character lines etched upon his face these days, but so darned appealing 'back then', an interview with his sister Fizz in 2002 revealed it to be no more than a childhood mishap with some traffic that was never treated properly by the doctor. ... (more) (less)
My tags:

3. Not Quite Hollywood: The Wild, Untold Story of Ozploitation! (2008)