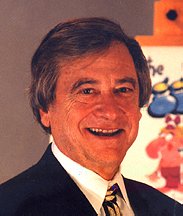 Ruby studied art and began his career in animation at Walt Disney Productions in the inbetweening department, later moving over to editing. He served in the Army and later worked for a short time in live-action television editing before moving to Hanna-Barbera Productions, where he met Ken Spears. The two teamed up to become writers, penning teleplays for several animated and live-action television programs, both freelance and as on-staff writers for Hanna-Barbera and DePatie-Freleng Enterprises.

For Hanna-Barbera, Ruby and Spears created Scooby-Doo, Dynomutt, Dog Wonder, and Jabberjaw, among other programs. At Depatie-Freleng, they created The Barkleys and The Houndcats. In the early 1970s, CBS president of children's programming Fred Silverman hired Ruby and Spears to supervise the production of CBS's Saturday morning cartoon lineup, a position they assumed at ABC when Silverman defected to that network.

Wanting to create competition for Hanna-Barbera, ABC set Ruby and Spears up with their own studio in 1977, as a subsidiary of Filmways. Ruby-Spears Productions produced a number of animated series for Saturday morning, among them Fangface, The Plastic Man Comedy-Adventure Hour, Thundarr the Barbarian, Saturday Supercade, Mister T, Alvin and the Chipmunks, and Superman, among others.

Ruby continues to work with Spears on the production and development of animated series.

4. Scooby Doo, Where Are You!
View all Joe Ruby movies