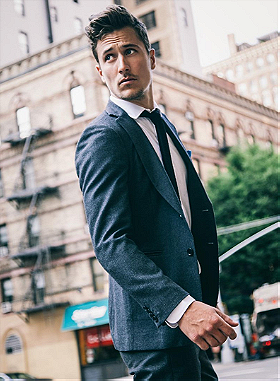 Santucci spent his childhood on a horse farm, where he trained more than a dozen race horses with his father. He adores his family and friends, all of which support him in all of his endeavors.

Santucci began his modeling career in 2006 by signing on with David Todd at Nous Model Management using another name Jay Sanz. His very first modeling job was working with veteran photographer Bruce Weber for Abercrombie and Fitch billboard campaign.

His strong features and exceptional physique gained the admiration of many advertisers and photographer, and had nailed many magazine spreads for Cargo, Details, and DNR magazine editorials. It was at this time that he changed his name to "Jeremy Santucci."

Now, signed with renowned agency Major Management, Santucci is taking the world of modeling on his hands. He's bagged multiple campaigns for Loehmann's, Emporio Armani, 2ixst and much more.

When not modeling, Santucci is into sports, cars and carpetry. His favorite things to do are motor cross, snowboards, wake boarding and working out. He goes to the gym 4-6 times a week and works with Ador Orca Fitness Program Manager and Trainer at New York Sports club, doing both weight training and aerobics. ... (more) (less)
Tags: Most Beautiful Men On Earth (1)
My tags: