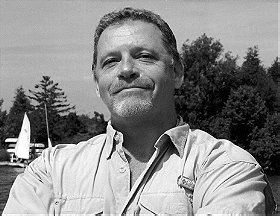 The first book in the Dexter series, Darkly Dreaming Dexter (which Lindsay wanted to name "Pinocchio Bleeds" after his middle daughter suggested it but his publisher disagreed) was included on the original nomination list for the Mystery Writers of America's Edgar Awards in the Best First Novel category. However, it was dropped from the list after the group learned that Lindsay had put out several books in the 1990s under another pen name, Jeffrey P. Lindsay.

Dexter aired as a 2006 TV series on Showtime with the first season based on Darkly Dreaming Dexter. The second and third seasons, aired in 2007 and 2008, respectively, have original storylines that do not follow the plots of Lindsay's books. On October 21, 2008, Showtime renewed the series for a fourth and fifth season, each consisting of 12 episodes. On November 18, 2011, it was announced that Dexter had been renewed for a seventh and eight season. Lindsay had a cameo role in the tenth episode of the third season of Dexter.