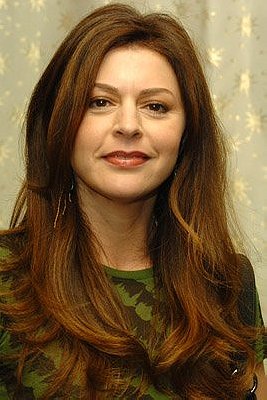 She graced the world of theater by starring as "Sally Bowles" in the Roundabout production of "Cabaret" on Broadway. Leeves has also lent her voice to various animated television series, including The Penguins of Madagascar (2008), Phineas and Ferb (2007) and The Simpsons (1989), as well as the major motion picture, James and the Giant Peach (1996). Leeves also appeared in the film, Music of the Heart (1999), which co-starred Meryl Streep. On June 16, 2011, Leeves -- along with costars Bertinelli, Malick, and White -- was presented with the key to the city of Cleveland by the mayor.

She recently started the "Tellurian Foundation", a line of all-natural skin care and baby products. A portion of the profits will be donated to those who strive to provide help to those in need, most recently "Food Share".

Originally trained to be a ballerina, until she suffered an ankle injury. Has also worked as a model.

Although born in Ilford Essex and brought up in East Grinstead in Sussex, she affects completly different accent (Mancunian) from 250 miles away for "Frasier" (1993).

Had her marriage blessed at St. Michael's Church, Withyham, Sussex in 1996.

Appeared as an uncredited dancer in the "Christmas in Heaven" sequence in The Meaning of Life (1983).

Played Sally Bowles on Broadway in "Cabaret" in 2002.

Daughter of an engineer and a nurse, Jane Leeves was born in Ilford, Essex, England. She was raised in East Grinstead, Sussex, along with two sisters and a brother.

During the "Frasier" (1993) episode "Frasier: It Takes Two to Tangle (#8.17)" (2001), "Niles" (David Hyde Pierce) tells "Roz" (Peri Gilpin) that "Daphne" (Leeves) lost 9 lbs and 12 ounces at the spa. Jane Leeves' pregnancy had fed the storyline that Daphne had lost control of her weight, and Pierce was referring to the birth of Leeves' daughter Isabella Kathryn Coben, who was 9lbs. 12oz.

2. James and the Giant Peach

4. James and the Giant Peach

Look Left voted for an image 8 months ago

radigast voted for an image 9 months, 1 week ago

Henrike voted for 6 images [View All] 9 months, 3 weeks ago

SomeBloke voted for an image 9 months, 3 weeks ago

lovedriver voted for an image 10 months ago

parzisix voted for an image 10 months, 3 weeks ago

Campagnola voted for an image 10 months, 3 weeks ago

time50 voted for an image 12 months ago

rasputin68 voted for an image 1 year, 3 months ago

ROADKILL41 voted for an image 1 year, 4 months ago