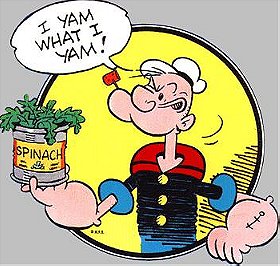 Sparber worked for Fleischer Studios in the 1930s and early 1940s where much of his early work was uncredited. However, he was credited as a writer for several Superman cartoons (all with Seymour Kneitel), as well as the feature length films Gulliver's Travels and Mr. Bug Goes to Town. He also wrote some Betty Boop cartoons, Color Classic cartoons and Popeye cartoons with no credit. Sparber was first mentioned in a Popeye cartoon as the namesake for a demolition company, Sparber Destruction Co., in the cartoon Quiet Pleaze!(1941). When Paramount Pictures took over Fleischer Studios in 1942, Sparber, Dan Gordon (animator) and Seymour Kneitel were named as the new heads of the renamed Famous Studios.

Despite working without onscreen credit for most of his tenure with the Fleischers, Sparber is credited with producing or co-producing nearly 400 cartoons afterward, and directed at least 160 of them. Among better-known Popeye titles Sparber is associated with are "Me Musical Nephews" (1942), "Cartoons Ain't Human" (1943) and "Popeye Meets Hercules" (1948), and he was also directly responsible for numerous entries in Famous Studios' Superman, Little Lulu/Little Audrey and Casper the Friendly Ghost series.

Isadore Sparber died August 29, 1958 in New York City. It has been said that this may have been a factor in Paramount's 1959 decision to discontinue production of several cartoon series and sell the rights to Harvey Comics, but apparently this is not the case. During the reorganization of Famous Studios into Paramount Cartoon Studios in late 1956, Sparber was fired along with a number of other veteran Famous Studios staffers as a measure to cut costs. That Sparber continued to collect credits until long after he was gone is a result of the long gestation time in animation; indeed, Sparber's last cartoon, "Travelaffs" (1958), opened just one week before he died. ... (more) (less)
Tags: Writer (1), American (1), Producer (1), Director (1), Screenwriter (1), Deceased (1), Animator (1), Born 1906 (1), Died 1958 (1), Storyboard Artist (1), Fleischer Studios (1)
My tags:

1. Matty's Funnies with Beany and Cecil

1. Matty's Funnies with Beany and Cecil