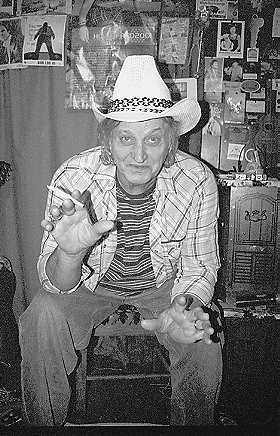 Was a a cult favorite among rockabilly music fans. His "Chicken Walk" and "The Hunch" became short-lived dance crazes in the 1960s.

He initially gained fame in the 1950s with his hooting and wailing vocals. When his popularity in the US faded, fans in Europe kept up a cult following. When the Cramps remade his song "She Said" in the early 1980s, his records became sought-after.

4. It Came from Trafalgar

5. It Came from Trafalgar
View all Hasil Adkins movies

5. Drinkin My Life Away
View all Hasil Adkins music (2 more)

2. Drinkin My Life Away