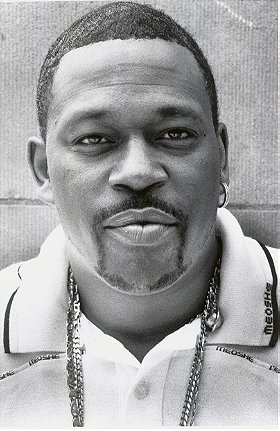 Career
Caz first encountered rap in 1974 at a Kool Herc block party. Shortly after, he teamed with DJ Disco Wiz under the name Casanova Fly to form one of the first DJ crews, Mighty Force. Caz was also the first rapper to perform both DJ (record) and MC (vocal) duties.

In the late 1970s, he joined The Cold Crush Brothers. Caz admits that he himself stole new equipment during the New York City blackout of 1977.

He currently hosts Hush Hip Hop Tours, the official sightseeing tour of Harlem and The Bronx.

Caz was interviewed for the documentary Just to Get a Rep released in 2004.

In 2008, he was one of the participants at the Cornell University Library conference on Hip Hop.

Artists who cite Grandmaster Caz as an influence include Will Smith, Rakim, Big Daddy Kane, Jay-Z and Cory Gunz.

In 2015, Caz featured on a single by Macklemore and Ryan Lewis named "Downtown".

Sugar Hill Gang controversy
A 2009 book claims that the lyrics for The Sugar Hill Gang's seminal Rapper's Delight were plagiarized from the then-unpublished Caz's lyrics. In 2000, he set his account of the controversy in the song "MC Delight". He claims in the song that he wrote the lyrics of Big Bank Hank (Henry Jackson), who had been the manager of his band, but never received any royalties or thanks for it. Jackson himself substantiated these claims as he neglected to change his verse on "Rapper's Delight" to reflect his own stage name, instead of beginning his verse with the now famous, "Check it out, I'm the C-A-S-A, the N-O-V-A, And the rest is F-L-Y." Casanova Fly is Grandmaster Caz's alternate moniker.

This controversy is referenced in episode 3 of part 2 of The Get Down. While listening to Rapper's Delight on the radio, The Get Down Brothers' member, Boo, tells his date that Grandmaster Caz is rapping the line and says that Caz is the "nicest MC around".

In June 2008, Grandmaster Caz was inducted into the Bronx Walk of Fame. A street plaque bearing his name is now on permanent display on the Grand Concourse, the most famous thoroughfare in the Bronx.

5. And You Don't Stop: 30 Years of Hip-Hop
View all Grandmaster Caz TV

4. Rapmania: The Roots of Rap