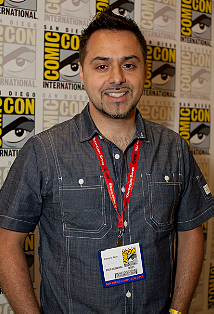 Volpe is currently directing on the new Disney XD animates series Star vs. the Forces of Evil.

On February 14, 2015 Volpe launched his webcomic God of Love via his giancarlovolpe.tumblr.com. The comic is 100% creator owned and feature two elven lovers on the run when the goddess of love is replaced by an evil demon.

Graduating from the School of Visual Arts in 1997, Volpe began his career at Humongous Entertainment, animating on the children's computer games Pajama Sam 2: Thunder and Lightning Aren't so Frightening and Putt-Putt Enters the Race. He moved to Fox (Film Roman) in 1998 to work on King of the Hill, where he was a character layout artist and assistant director.

In 2004, Volpe went on to direct 19 episodes of the Nickelodeon series Avatar: The Last Airbender. He won an Annie award for episode 213, "The Drill".

In 2008, Volpe moved to Lucasfilm Animation as an episodic director on Star Wars: The Clone Wars where he worked directly with famed filmmaker George Lucas.

Volpe also produced the CG television show, Green Lantern: The Animated Series working with animation producer Bruce Timm. The series ran for 26 episodes and had a devout following, where its loyal fan base was dubbed "Green Fanterns".

In January 2014, Warner Bros. released JLA Adventures: Trapped in Time which was produced and directed by Volpe. JLAATIT is a 52-minute direct-to-video movie featuring the Justice League and received critical praise for its fun factor and kid friendly tone.

Volpe also spent 2014 working at Riot Games, where he helped create animated content based on wildly popular MOBA game League of Legends. Content was designed to expand upon the very fast world and character base of the game. ... (more) (less)
My tags:

4. One Plus One Equals Two
View all Giancarlo Volpe movies

2. One Plus One Equals Two