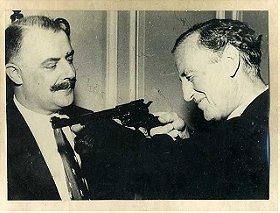 Beginning with A Guide to Gun Collecting and Guns Through the Ages (both 1961) to The British Over and Under Shotgun co-authored with Susan Boothroyd (2004), Boothroyd was a prolific author on the subject of firearms.

Whilst employed with the Imperial Chemical Industries, an ammunition manufacturer, Boothroyd wrote a letter to Fleming professing admiration for the character of James Bond, but not his choice of weapons, particularly the .25 calibre Beretta Jetfire. Fleming responded to Boothroyd with their correspondence concerning weapons being reprinted in various places.

As a result of the correspondence Fleming gave Bond a Walther PPK pistol in Dr. No and made a "Major Boothroyd" a character in the novel. (The real Boothroyd held no such rank.)

Boothroyd provided Richard Chopping, the illustrator of the first edition cover of From Russia, With Love, with his own .38 Smith & Wesson snubnosed revolver modified with one third of the trigger guard removed to coincide with Fleming's wishes of a design of a pistol with a rose. Boothroyd had to assist the police with their enquiries when a similar weapon was used in a triple murder in Glasgow explaining that his weapon had been posted to Ian Fleming for a book cover. Peter Manuel was later arrested for the murder, convicted and executed.

In the first Bond film, Dr. No, Major Boothroyd, portrayed by Peter Burton, recreates the scene from the novel. Starting with the following From Russia With Love, Desmond Llewellyn played the Armourer, later christened Q, in all the following films but one until his death.

Geoffrey Boothroyd appeared as himself in a short film The Guns of James Bond available on the Goldfinger Ultimate Edition DVD.
... (more) (less)
My tags: