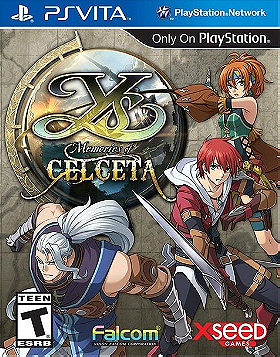 View all Ys: Memories of Celceta pictures
In Ys: Memories of Celceta, developer Falcom revisits the land and characters of Japanese cult favorite Ys IV for its first ever North American debut. This re-envisioning of the fourth installment in the Ys series takes a brand new approach, changing and framing the story of Ys IV within an all-new tale of conspiracy, deception and mystery. Featuring an updated version of the party-based battle system from Ys Seven, as well as the largest and most varied overworld in series history, Ys: Memories of Celceta brings a greater sense of adventure to the Ys universe than has ever been seen before.
Manufacturer: Xseed
Release date: 26 November 2013
Number of discs: 1
EAN: 0853466001605 UPC: 853466001605
Tags: RPG (1), XSEED (1), NIS America (1), Falcom (1), Playstationvita (1)
My tags:

masterlobo added this to owned list 1 year, 3 months ago

TwinkleRPG rated this 9/10 2 years ago

jgc added this to owned list 3 years, 2 months ago

jgc added this to a list 3 years, 2 months ago
My PS Vita Collection (28 games items)

Krayzel added this to owned list 5 years, 7 months ago