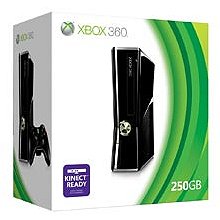 It was speculated that a complete redesign of the Xbox 360 hardware was being produced after pictures of a possible new motherboard design surfaced on March 17, 2010. Ads later surfaced on June 13, 2010 showing a slimmer Xbox 360 design, which was expected to include a 250 GB hard drive and integrated Wi-Fi functionality.

Xbox 360 S consoles feature redesigned internal architecture with the Valhalla motherboard, which allows for around 30% more space than previous motherboards,[29] and the XCGPU, an integrated CPU/GPU/eDRAM chip using a 45 nm fabrication process. This allows them to be both smaller and quieter than the previous versions of the Xbox 360. They also feature 5 standard USB 2.0 ports (2 more than previous models) and an additional custom USB port for use with peripherals such as the Kinect sensor. Unlike older models, 2.4 GHz 802.11 b/g/n Wi-Fi and a TOSLINK S/PDIF optical audio connector are also built-in, allowing for digital audio and wireless networking without the need for external adapters. The Memory Unit slots found on previous consoles have been removed in favor of the USB flash drive solution added in a previous system software update (released on April 6, 2010) and the power and DVD drive eject 'buttons' are touch sensitive rather than the physical buttons found on previous models. The external hard disk drive connector has also been swapped for an internal bay for use with a proprietary hard drive; this is neither a standard drive or compatible with older models. Other notable hardware changes include the use of one larger fan compared to the previous Xbox 360 models (which used two smaller ones) and the design of the vents, which are similar to those used on the original Xbox. Unlike previous generations of the console which had names to distinguish different SKUs, the new models are to be marketed solely by the amount of included storage, in a similar fashion to current models of its main competitor the PlayStation 3. When the first new models began to ship, remaining stock of the Elite package dropped in price to US$249.99 or AU$349 and the Arcade dropped to US$149.99. ... (more) (less)
Manufacturer: Microsoft
Release date: 18 June 2010
EAN: 0885370127164 UPC: 885370127164
My tags: