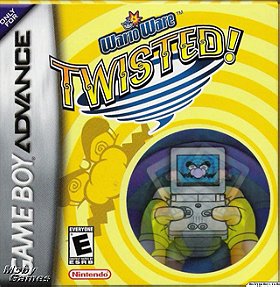 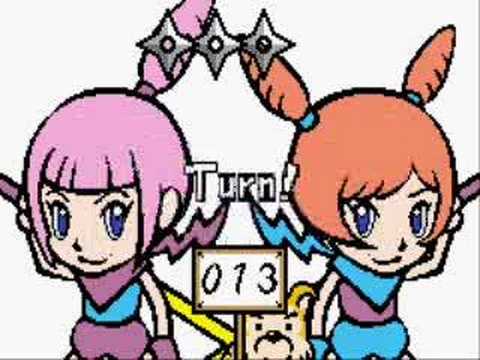 WarioWare Twisted! is the sequel to the sleeper hit WarioWare Inc.: Mega: Microgame$!. It includes a built-in rumble pack and gyro sensor which the games have been designed around. Over two hundred five second games are hurled at the player as they make their way through the stage, trying to figure out what to do with a short description like "Play!", "Avoid!" or "Digest!". Each stage has a random game thrown at you, with a short time to complete it. Fail it, and you lose one of your four lives. Lose all four and it's game over. Pass enough games, and you'll get told "FASTER!" and the games start coming at you at a quicker speed. Finally, you'll encounter a Boss Stage, which has no time limit and is tougher to beat.

Each character's stage is based around a different 'theme'. Mona's games require you to make only a small spin to pass them, Jimmy T.'s games need a consistent rhythm to play, Kat and Ana's games simply need the use of the A Button, Dr. Crygor's games involve changing gravity itself, while the Nintendo nerd pair 9-Volt and 18-Volt have a set of Nintendo games which use all of the different styles of play from the other game sets.

Twisted! also has a huge amount of novelty unlockables to collect. Once you've played through Story Mode, you can replay the games again for a higher score and bonus toys. Whenever you beat a Boss Game after completing Story Mode once, you'll be prompted to spin to get a bonus prize. This prize could be as simple as a light wand that you shake to see a picture, or a small arcade-style game involving sewing or rolling a cat around the floor while shooting bugs.
... (more) (less)
Manufacturer: Nintendo of America
Release date: 23 May 2005
Number of discs: 1
EAN: 0045496735296 UPC: 045496735296
Tags: Puzzle (1), Compilation (1), GBA (1), Twisted (1), Wario (1), Microgames (1), Warioware (1), Gyro Sensor (1)
My tags:

Waleed added this to a list 2 years, 8 months ago
GBA Games (60 games items)

patrician added this to owned list 2 years, 8 months ago

Alchemist1306 added this to wanted list 3 years, 6 months ago

Stilettophant rated this 6/10 4 years, 4 months ago

Elusuariodiverso rated this 8/10 5 years, 5 months ago

Lightning Francis added this to a list 6 years, 2 months ago
Top 100 Games of the 6th Generation (100 games items)