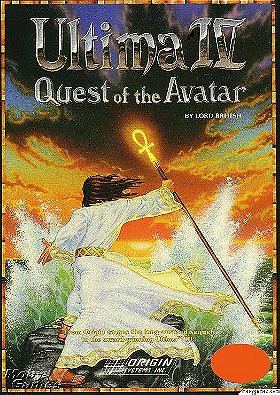 Instead of building up your character by any means possible in order to face the Ultimate Evil in a big bang up showdown, in Ultima IV you were trying to become the Avatar, a role model of sorts for the people of the land. This meant upholding the "eight virtues" and basically trying to become a better person. In most RPGs you chose to be a just/nice hero because the people you'd help would usually provide you with some nice equipment for your services, but in Ultima IV you helped people not for a reward or to advance the plot but simply because it was the "right thing to do". The game actually frowns on behavior that was typical of most other RPGs, such as backstabbing fleeing monsters or picking up everything that wasn't nailed down even if it didn't belong to you. The game keeps track of all your actions, so if you went about killing and looting like in most RPGs, you'd never finish the game.

This VERY different approach to the game's ultimate goal is what makes Ultima IV famous so many years later, and became the sort of design philosophy that made all the following Ultimas so unique in their genre.

X-Vector added this to owned list 4 years, 2 months ago

grandwazoo added this to a list 4 years, 9 months ago

"Birth of the CRPG? Yes, and i fucking luv it."

" Ultima IV: Quest of the Avatar is the video game as morality play. For perhaps the first time in computer RPG history, here was a game that wasn't about defeating a bad guy or unshackling the world from the yoke of evil, but rather about learning to embody eight virtues that made you a better person and thus an inspiration to the surrounding world. Kindheartedness, not battle prowess, is the true star here. This was revolutionary stuff at the time, and over three decades later, it remains so. "

Elusuariodiverso rated this 8/10 5 years, 5 months ago

bonfancreativo added this to wanted list 5 years, 5 months ago

InTheWitheringWind rated this 10/10 5 years, 6 months ago

colonywars added this to owned list 6 years, 9 months ago