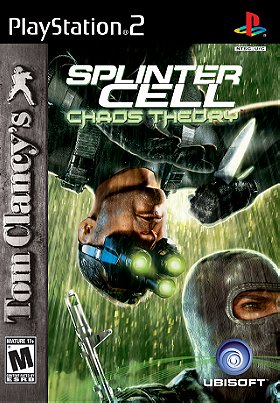 In Splinter Cell: Chaos Theory, you take on the role of field operative Sam Fisher for a third outing. Fisher has some new moves this time around, and he also has a new weapon always at his disposal; a combat knife. Utilizing the knife, Sam can either kill his enemies, or simply knock them out. At the end of each mission, you are given an overview of how you did, and the more people you knocked out as opposed to people you killed, will net you a better success score.

The single-player game is more open-ended than the past two Splinter Cell games. While you are still forced through some areas with no choice of where to go, a lot of times you can decide how you want to get there. For example, in the caverns, you can either kill two enemies and cross the bridge, or leave them alone, sneak along the side path, and climb a ladder at the end, bypassing the fight entirely, but still ending up where you needed to be.

Throughout the game, you will visit many different locations. You'll be taken to a lighthouse to a Japanese tea house, to Seoul to New York City during the big East Coast blackout.

The Spies-vs-Mercs multiplayer mode that appeared in the previous game has returned, with some new features. There are several new, large maps to play on, as well as updated versions from the past game. The PC, PlayStation2 and Xbox versions feature this mode. ... (more) (less)
Manufacturer: UbiSoft
Release date: 31 March 2005
Number of discs: 1
EAN: 3307210175243
Tags: Action (2), Stealth (1), 3rd Person Shooter (1), AcciÃ³n (1)
My tags:

bebac added this to wanted list 4 years, 4 months ago

Gumtierl added this to wanted list 4 years, 5 months ago

Guntirl added this to wanted list 4 years, 6 months ago

consulli1987 added this to owned list 5 years, 8 months ago

louispencer added this to wanted list 5 years, 8 months ago

louispencer added this to wanted list 5 years, 12 months ago