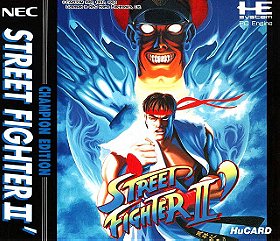 View all Street Fighter II': Champion Edition pictures (20 more)
From the corners of the globe come twelve of the toughest fighters to ever prowl the streets. Choose your champion and step into the arena as one of the eight original challengers or as one of the four Grand Masters! Pound your opponent as Balrog and knock them out for the count. Tower over your prey as Sagat and daze them with your awesome Tiger Shot. Slash your opponent with Vega's claw and send them running for cover. Or strike fear into your enemies as M. Bison, the greatest Grand Master of them all!
Tags: Street Fighter (1), Capcom (1), Fighting (1), PC Engine (1)
My tags:

José Lopes added this to list 1 year, 10 months ago

ape added this to a list 2 years, 9 months ago

" Beat December 31, 2017 Waiting for some friends to come over for New Year's Eve, I figured I could get at least one more game beaten for the year...this was a pretty slow year for me beating games, afterall. So, I thought it'd be nice to play some TurboGrafx-16, or PC Engine, or whatever you'd like to call it. Street Fighter II: Champion Edition is a solid entry in the Street Fighter franchise...but aside from the fact that it's the only version of the game on NEC's console, it's also not real"