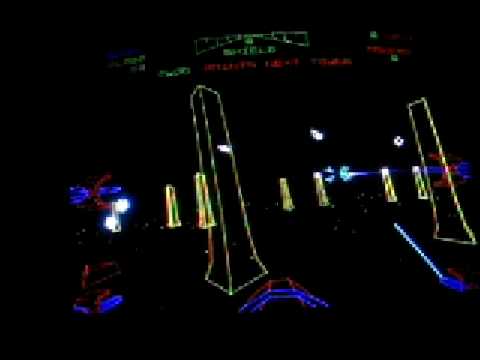 The player assumes the role of Luke Skywalker ("Red Five"), as he pilots an X-wing fighter from a first-person perspective. Unlike other arcade games of similar nature, the player does not have to destroy every enemy in order to advance through the game; he must simply survive as his fighter flies through the level, which most often means he must avoid or destroy the shots that enemies fire.

The player's ultimate goal is to destroy the Death Star through three attack phases.

* In the first phase of the game, the player begins in outer space above the Death Star. He must engage in a dog fight with Darth Vader and enemy TIE fighters.

* In the second phase, the player reaches the Death Star's surface as laser turrets on towers rise to confront the player. If the player manages to destroy all of the towers, he will receive a sizeable point bonus.

* In the final scenario, the player finds himself speeding through the trench of the Death Star, avoiding obstacles and blasting gun turrets until, finally firing a proton torpedo at the correct time for a direct hit on the exhaust port target. What follows, if the player is successful, is the Death Star exploding in a multitude of different colours. Then it is on to do battle again.

Each successive Death Star run greatly increases the difficulty; TIE Fighters shoot more often, there are more Laser towers and batteries in the second round, and there are many more obstacles and laser fire during the trench run. Unlike the movie, where the units shoot beams similar to lasers, the enemy units in this game shoot projectiles resembling fireballs, in order to give the player a chance to destroy the fired shots. ... (more) (less)
Release date: 1 July 1983
Tags: Shooter (2), 1983 (2), Arcade (2), Star Wars (1), 1980s (1), Atari (1), Based On Film (1), Movie-based (1), Developed By Atari (1), Ported To Atari 2600 (1), Vector Graphics (1)
My tags:

patrician added this to owned list 3 years, 4 months ago

patrician added this to wanted list 3 years, 5 months ago

Elusuariodiverso rated this 6/10 5 years, 3 months ago