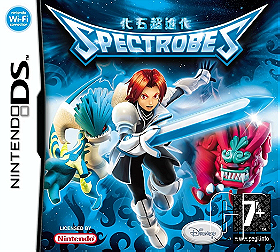 View all Spectrobes pictures
Spectrobes puts you in charge of a mission that could save the galaxy! Two junior Interplanetary Patrol officers, Rallen and Jeena, learn of strange, prehistoric creatures with strange powers called Spectrobes. They hold the key to defeating a vicious and merciless force, known only as the Krawl. Our two young heroes embark on a mission to save their galaxy: Excavate, awaken, train and collect all the Spectrobes they can -- and get them ready to battle the Krawl.
Manufacturer: Buena Vista
Release date: 13 March 2007
EAN: 0827307950759 UPC: 827307950759
My tags:

redComicsar added this to owned list 1 year, 1 month ago

colonywars added this to wanted list 5 years, 6 months ago