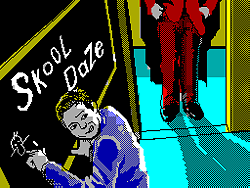 1 vote
View all Skool Daze pictures
Is a computer game released by Microsphere in 1984 for the ZX Spectrum and Commodore 64 computers. It was written by David and Helen Reidy, with graphics designed by Keith Warrington. The game was commercially and critically successful, and praised for its original concept. It has since been regarded as one of the pioneers of the sandbox game genre.
Tags: Adventure (1), Arcade (1), 1984 (1)
My tags:

kathy voted for an image 4 years, 4 months ago

Sndi added this to a list 4 years, 7 months ago
My Offline Games History (208 games items)