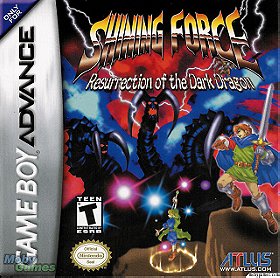 The heart of the game are of course the tactical turn-based battles. You can take up to twelve different members of your Shining Force into battle. There are many different classes ranging from fighters and magicians to healers, knights, monks, ninjas and many more. In-between battles you can explore various towns to buy new weapons and items or chat with the townsfolk. There are also a number of secret characters and items to be discovered.

Shining Force's gameplay has also seen some changes. The interface has been slightly simplified and you can now organize your units before battles. During battles, it is now possible to view upcoming turns, which makes it much easier to plan your next steps. To make the battles more interesting, even for fans of the original, you receive certain bonuses (usually money or a weapon) for completing battles in a set number of turns. Finally, a card-collecting side-quest has been added. Cards can have various effects in battle and one character is able to transform into the cards that you have found. ... (more) (less)
Manufacturer: THQ
Release date: 29 April 2004
Number of discs: 1
EAN: 4005209053358
Tags: RPG (1), Tactical Rpg (1), Strategy (1), GBA (1), SRPG (1), Strategy RPG (1), TRPG (1), (1)
My tags:

Rui Murteira Gomes added this to owned list 1 year ago

redComicsar added this to owned list 1 year, 1 month ago

Gumtierl added this to wanted list 3 years, 12 months ago

Paulo Júnior added this to a list 3 years, 12 months ago

"Remake of Shining Force: The Legacy of Great Intention"

MegaJ added this to wanted list 4 years, 3 months ago

whithbrin added this to wanted list 4 years, 4 months ago

Elusuariodiverso rated this 8/10 4 years, 11 months ago

Guntirl added this to wanted list 5 years, 1 month ago