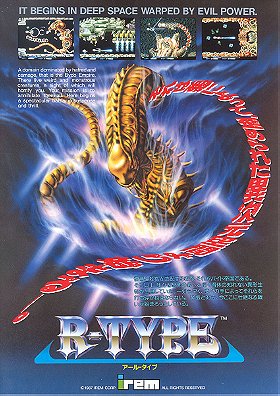 View all R-Type pictures (2 more)
R·Type is a side scrolling shoot-em-up arcade game produced by Irem in 1987. The player controls a space fighter named "Arrowhead" to defend humanity against a mysterious but powerful alien lifeform known as "Bydo", which was later discovered to be not entirely alien in origin (see the "Bydo" section for details). R·Type is recognized as one of the classics of the shooter genre from the 1980s arcade.
Release date: 1 July 1987
Tags: Shooter (1), Arcade (1), Side-scrolling (1), Developed By Nintendo (1)
My tags:

patrician added this to wanted list 2 years, 8 months ago

Elusuariodiverso rated this 8/10 4 years, 4 months ago